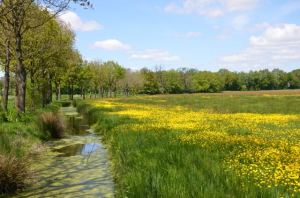 The site is located south of Sellingen, the Pearl of Westerwolde. This village originated in the Middle Ages. Within cycling distance is the village of Ter Apel (8 km), which is known for its monastery from the 15th century. This is open to the public. About 20 km to the south is Emmen and 20 km to the north is Stadskanaal, both small towns with their own qualities. The city of Bourtange is 10 km above Sellingen and the city of Groningen is a 45-minute drive away. Looking for that extra holiday feeling? “De Slangenborg” is located a few km from the German border. So you can visit abroad on foot, by bike or by car.

Forests: The Sellingerveld, formerly the moors of the marke Sellingen, was reclaimed in the 1930s as part of the job creation process. These have been converted into agricultural land and forests that have come under the management of Staatsbosbeheer and form the forest area Sellinger Bossen, about 600 hectares in size. Some of the forests are now used for water extraction. De Ruiten Aa was canalized in the 1960s, but in the 1990s it meanders in the context of nature development.

Theater of nature: In the middle of the nature of Sellingen, on the Dennenweg, you will find the smallest theater in the Netherlands: THEATER OF NATURE. A rotating stage frame on a tripod allows you to look at the surrounding landscape in different ways. You get a different show every day! The fifteen steps to the top of the lookout point feature fifteen poems, written by Harry Muskee and Def P, among others. The artwork was created by visual artist Adriaan Nette.

Stelmakerij Sellingen: The Stelmakerij in Sellingen is a historic building that is now furnished as an exhibition space about the history of Westerwolde. The Westerwolde Tourist Information Point is also located in the Stelmakerij. The property was purchased in 2011 by the municipality of Vlagtwedde. They had the building restored. The building-historical research showed that the trusses (the wooden supporting structure in the building) date from 1697. Together with the reformed church, the old Stelmakerij is therefore one of the oldest (still existing) buildings in the village. The current building was probably built around 1850. It was used as an inn for about forty years. Later, from 1890 to 1962, the threader family’s set-up workshop was located here. They made farm wagons and wooden tools here.

Sellingerbeetse: The Sellingerbeetse is a hamlet west of Sellingen. In the hamlet is the little church ‘Upward!’, built in Amsterdam School style in 1925 by order of the Dutch Reformed Church. It currently serves as a cultural stage and is used for exhibitions and meetings. The nature reserve ‘the Sellingerveld’ borders the Sellingerbeetse. In that area there are three large sand lakes that have been created over the years by sand extraction, locally known as the ‘Beetser Koeln’ (Beetserkuilen). The water in the puddles has an unprecedented blue color.

Art village Sellingen: With the art route at Whitsuntide, the Montmartre painters’ festival in the second weekend of July and the studio route De Beetse Ter Borg in the first weekend of August, Sellingen is rightfully the art village of the North!

Montmartre Painters Festival: Every second Saturday of July, Montmartre Painters Festival is held in the heart of Sellingen, on and around the Brink. During this cultural festival you can get acquainted with (amateur) art such as three-dimensional, painting, performing arts and street theater. Various demonstrations and performances are given, you can admire and buy various art on the market and at the auction. The various cozy terraces and the portrait artists complete the French atmosphere.